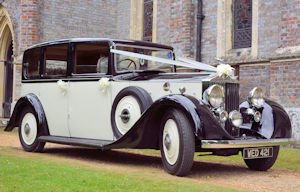 Our stunning ivory & black 1935 Rolls-Royce 20/25hp Pullman Limousine with coachwork by Barker is fitted with an opening front windscreen and two 'pop-out' rear side windows as well as normal 'wind-up' windows to the 4 doors.

The front is fitted with two large Lucas Biflex headlights together with a Notek centre spot lamp and twin Lucas horns, all in chrome.

It can seat up to 6 passengers, 5 in the rear cabin and i beside the driver, although we do not deploy the occasional seat in front of the Bride when making a single trip thus limiting the seating to a maximum of 5 passengers.
Please note we are unable to carry infants or children under the age of 7 years in this vehicle due to the lack of seat belts. 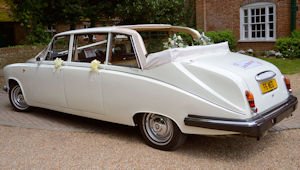 Our ivory 1989 Daimler State Landaulette started life as a ministerial limousine in Northern Ireland before becoming the Mayors car in Glasgow for a couple of years. It has retained the 'screw mount' on the bonnet where they once flew the 'flag of office'.
It has a convertible roof above the rear passenger seat that fully rolls back during fine weather. It is also the only ivory convertible Daimler in the UK that is fitted with built-in twin confetti cannons!
It has a large compressed air tank in the boot and two tubes that protrude up through the rear parcel shelf that are hidden by ornamental bird cages with silk flowers. The tubes are filled with either bio-degradable confetti or dried flower petals and, once armed, two 'James Bond' like switches on the front dashboard enable us to fire the cannons on the command of your photographer - allowing you to have a unique photo opportunity on your special day - often surprising your guests!
It has Beige leather seats and door trim and is fitted with seat belts in the front (1) and rear (3) enabling us to carry both infants and small children, if required. The fold-up 'occasional' seats allow us to carry a total of 7 passengers (6 in the rear cabin and 1 beside the driver) although we normally limit this to a maximum of 5 passengers with the Bride on board so as not to squash her dress. With the 'occasional' seats stowed away there is lots of room for a Bride with a large wedding dress. 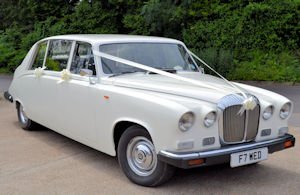 Our ivory Daimler DS420 is fitted with seat belts in the front (1) and rear (3) allowing us to carry both infants and small children, if required.
It has Dove grey leather seating, headlining and door panels with a walnut veneer dashboard and door trim.
It has a aliding glass privacy screen between the driver and the rear passenger compartment.
The fold-up 'occasional' seats enable us to carry up to 7 passengers (6 in the rear, 1 beside the driver) although we normally limit this to a maximum of 5 passengers with the Bride on board so as not to squash her dress. ​With the occasional seats stowed it gives plenty of room for the Bride with a large dress.